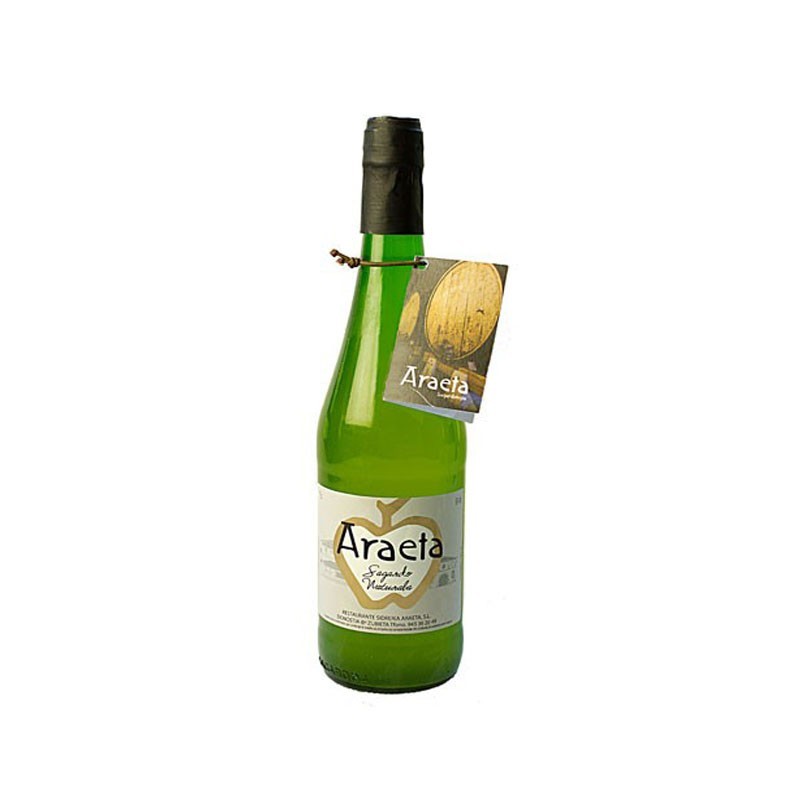 Naturally fermented apple cider, a product with a long tradition, made with dedication and loving care. This drink is the result of natural alcoholic fermentation of fresh apples, made with different varieties (acidic, bitter and sweet), following long-established traditional practices.

The secret to making 'Araeta Sidra' (apple cider) is selecting the best apples from suppliers of different regions and historic orchards.

The apples are selected at a selection table, which are then washed by a floatation method which transports them to the gyratory pump to eliminate any contaminants. In the pump they are washed again for the second time. The selected apples arrive at a chute where they are crushed through cutters and then cold pressed by a hydraulic press to obtain the highest quality possible. The fresh juice, or 'mosto', is put into vats for 12-24 hours for the settling and a one-time filtering process.

Once the process has finished, the product is put into 'kupelas' or barrels where alcoholic and manolactic fermentation occurs at a controlled temperature, which produces the final product after 2 to 3 months. When this process has finished it is bottled and sold as Araeta Sidra.

Gipuzkoa is one of the three provinces of the Basque Country. It is located in the north of the Iberian peninsula on the Cantabrian coastline. This organic, still cider is made traditionally, with the starting point being a good local apple. With this in mind the producers promote and develop orchards locally using only native apples.

This cider is made using 100% native organic apples and has a tart initial flavor which is balanced and rounded by sweetness. It is naturally fermented without the addition of yeasts or sugar.

Araeta was founded in 1992, one of the main tasks of the Araeta sidestreet has been the production of its own and familiar cider, following step by step the traditional method, from the reception of the apple, through pressing, to bottling, thanks to 40,000 m2 of own land of apple tres.