The Basque Country or Euskadi is a Spanish autonomous community, located in the north-eastern end of the Cantabrian strip, which borders the Bay of Biscay (Cantabrian Sea) and France (Aquitaine) to the north, La Rioja to the south, Cantabria and Burgos to the west and Navarra to the east, with which we share many cultural and historical similarities.

The name Basque Country (Euskal Herria) means “the country of Euskera (Basque) speakers”. Euskera was used by the inhabitants of the Basque Country, Navarra and the French Basque Country even before the Romans arrived. The full history of the Basque people, as well as the origins of their language, are steeped in mystery. However, their identity is very clear and differentiated. This can be seen in the variety of Basque music, dances, sports, festivals and gastronomy.

But this strong identity has not prevented a new image of the Basque Country from emerging. Bilbao is a perfect example, now converted into a mecca of design and architecture. The Guggenheim Museum, designed by Frank Gehry, is the most famous example.

San Sebastian is also redefining its image around the world with its extraordinary gastronomy. The town can be proud of being home to two restaurants classed in the top 10 of the 50 Best Restaurants in the World and also has 15 Michelin stars distributed between 7 restaurants. It is also one of the best places to enjoy pintxos - miniature culinary creations.

In the Rioja Alavesa, on the other hand, family wine-cellars and vineyards and large avant-garde buildings can be found, among which to walk and relax.

There is so much more and so many places to discover in the Basque Country. The region is full of picturesque villages, the same as those that can be found in the French Basque Country or Navarra, as well as many fishing communities along the coast.

Another unmissable feature is the spectacular Vizcaya Bridge, declared a World Heritage Site by UNESCO. Also, if you are a culture lover, you have an important date to remember: the famous International Film Festival at San Sebastian that takes place at the Kursaal Palace. All this, plus spectacular nature and countryside (the Basque Country has both Nature Parks and Biosphere Reserves) that are perfect for doing sports in.

One of the best gastronomies in the world, beaches surrounded by nature, examples of avant-garde architecture, mountains, culture… ultimately, this is the Basque Country. 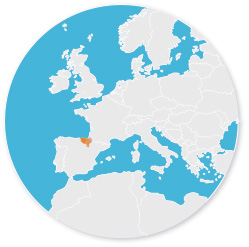