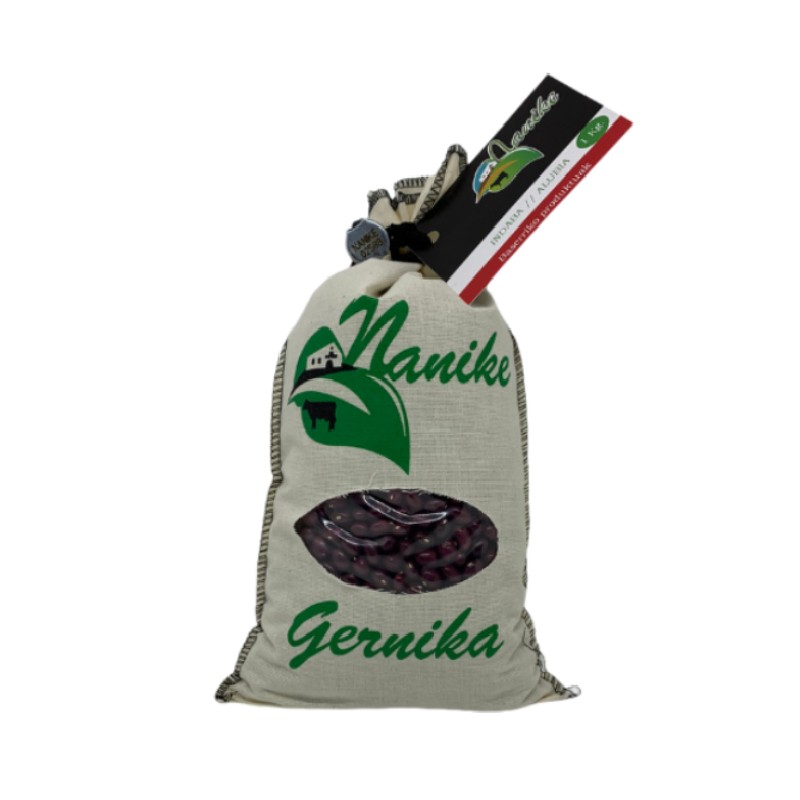 The shape of the Gernika beans is oval and elongated. Eggplant-black in color, it has been cultivated since the 18th century on small farms in the counties of Mungia, Busturialdea and Lea Artibai (all municipalities within the province of Bizkaia). The artisanal production of Gernika Beans in small orchards near the farmhouse is characterized by using the most environmentally friendly cultivation techniques. It is a product "of quality and interesting, which has its place in the market".

The Gernika bean season begins in October, a legume that has a great tradition and is renowned in Biscay. It is one of the three varieties of the Basque Country that enjoy the distinctive Euskal Babarrunak.

This “gernikesa” type variety is cultivated by hand in the Biscayan counties of Mungia, Busturialdea and Lea Artibai.

The microclimate of these lands, with humidity and mild temperatures, make these beans something unique. They are sown in May and harvesting begins in October, characterized by having a garnet color with pinkish spots, an elongated oval shape and a mild flavor. In the autumn months it is the protagonist in local fairs, such as the Last Monday of Gernika. After a progressive reduction in the cultivated area of ​​this legume in recent years, today it has recovered quite a bit.

The bean has been grown in the farmhouse gardens for 300 years, associated with other crops such as corn. Although it has similarities with the Tolosa bean, it is less dark in color, has a slightly thicker skin and a somewhat thinner broth when cooked.

After leaving them to soak the day before, the Gernika beans are cooked over a slow, continuous heat. Unlike those of Tolosa, which are cooked only with oil and salt, vegetables are added to those of Gernika.

The bean is an energetic food, with many proteins and carbohydrates and practically no fat. In addition, they are rich in vitamins and minerals, such as potassium, magnesium and calcium, and more fiber than fruit. The Gernika Beans are red and generate a fine light red broth after cooking. It is a typical Euskadi dish that began to be consumed coinciding with the slaughter of the pig and the harvest of the beans. It is usually a single dish that includes chorizo, black pudding, bacon and ribs. In some areas it is also accompanied by green chillies.